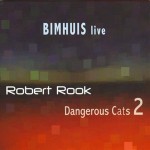 ‘Dangerous Cats’, in the jargon of the American hipster, are musicians who are so good they’re almost scary, especially if you’re a competitor. Dutchman Robert Rook used the term to name his latest CD, and he can wear the name himself as well. He is an extraordinarily complete pianist, and the beautiful grand piano at the Bimhuis has rarely been given such a heavy and satisfying workout as it has this Friday.

Rook is a former mathematician and computer programmer, which may be the reason why he dissects the most complex chord changes with such precision, yet he is first and foremost a romantic. He commands the entire dynamic spectrum, from delicate harmonic veils to thundering climaxes, and all this with such unconditional commitment that he sometimes even stands up for some added emphasis.

As with all contemporary pianists you can point out influences, such as Oscar Peterson, Bill Evans and Lennie Tristano, but in Rook’s case these are completely absorbed and therefore almost irrelevant, as is his sometimes slightly predictable choice of material. Whether he’s playing Autumn Leaves, Stella By Starlight or another evergreen, he turns it into his own capricious but solid tension arc, with an irrepressible, natural swing that is rare, certainly for the Netherlands, and phrasing that, down to the smallest nuances, sounds like the only right one for that moment. That is why the technique on show never came across as an attempt to overawe; there were two-handed acrobatics when the music demanded it, but Rook also knows the power of a few simple but well-placed notes.

Before the intermission he performed in a trio setting, with bassist Thomas Andersen and drummer Dick Verbeeck who gave him alert support and responses, and the music was already teeming with surprising brain waves that pulled the pieces into another direction. But during the second set tenor saxophonist Rob Armus joined them, and the interaction and unpredictability became even greater. Wayne Shorter’s Nefertiti was a fitting choice, because in its maneuverability and freedom within clear agreements, the quartet was strongly reminiscent of the Miles Davis group in which this composition was baptized. Impressions by John Coltrane, a steaming highlight, made it clear that Armus knows how to handle the declamatory style of that tenor sax titan, and that Robert Rook the accompanist is also a strong personality.