Liner notes Too Much Bass 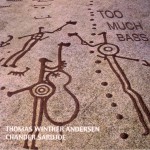 A dramatic situation occurs when the band lays out and offers the bass player a solo for approximately forty-five seconds….. “What to do?” Since I first became acquainted with the bass at age thirteen, I was encouraged by friends and family to perform something unaccompanied. Although I was excited about every smooth bass riff and rhythmic figure that I achieved, they did not quite express the full range of musical possibilities which I felt the bass was capable of producing. Two decades have passed since my first encounter with the bass and I still enjoy searching for something meaningful to say with it as a solo instrument. The interest behind this project has evolved organically during the time which I have been exploring the bass and its unique qualities. Essential to this recording were the following questions that came to mind: Would it be viable to feature the bass on an entire CD? How can I gather the inspiration to actualize a forty-five minute recording with drums, that is comprised of diverse musical material?

A few comments regarding some of the pieces:
Giant Steps is arranged with an abundance of metric changes. Two bars of 6/4 and two bars of 4/4 repeated. Then 3/4 and 4/4 interchanging every bar. The duration of each chord is extended which enables the arranged double stops to be clearly heard. Creating a new rhythmic scheme opens up a realm of possibilities for improvising on this Coltrane classic.

Black Orpheus contains an irregular rhythmic sequence of 4/4, 5/4 and 6/4 which lifts the form off the ground while creating a feeling of instability; a feeling one might experience while attempting to ride a wave on a surfboard or simply by trying to stand on a spherical object such as a basketball.
Too Much Bass part one was inspired by the long notes of the Didgeridoo. It has often been my experience that when a long tone or a chord is hanging in the air it elicits melodies which are not actually produced. Part three features an interchange between bowing and pizzicato techniques which is intended to give the impression of two parallel ideas flowing simultaneously. The improvised parts are connected with short melodic cues.

The conception of these arrangements were very much inspired by my musical collaboration with Chander Sardjoe. He always contributes a plethora of ideas which leads to fun interaction. Chander is a great master of his instrument and he seems to thrive when the arrangements become more complex and dense. Occasionally we exchange instruments to twist our musical perception, although this is not yet part of the performance. For now it’s just “Too Much Bass.”